A crew of four amazing young adults from the Pennsylvania Outdoor Corps worked tirelessly in mid-October at Columbia River Park. The Park Expansion Area north of the Veterans Memorial Bridge has been inaccessible and overgrown for years. The area is partially forested and partially meadow. The area is also home to two land piers from the bridge that was burned during the Civil War. In 2019, a park master plan project created designs for the 11-acre expansion area. Amenities like a natural amphitheater, nature playground, pavilion, canal restoration, and loop trails along the river. Many of these projects will take long-term planning and heavy construction. Susquehanna NHA and Columbia River Park Advisory Committee sought inexpensive ways to provide more immediate access so they partnered with Pennsylvania Outdoor Corps.

Pennsylvania Department of Conservation and Natural Resources has a Public Partnership Program that provides municipalities and other non-profits the opportunity to partner with the Outdoor Corps to undertake recreation and conservation projects on non-DCNR public lands on a cost share basis. Crews can do a variety of projects from improving land, trails, and playgrounds to improving waterways and riparian buffers. At Columbia River Park, the crew worked to clear invasive species, extend the loop trail to the river, repair split-rail fence, and lay a trail surface.

The cost of this project was entirely funded by private donations. On behalf of Susquehanna NHA and Columbia River Park Advisory Committee we sincerely thank the Columbia Park Rangers, Mountz & Kreiser, Columbia’s Foresters of America, and all those that donated online to this project. This would not have been possible without the generosity of each donor.

Japanese knotweed, tree-of-heaven, and other invasive species had been growing unchecked in the area. Spotted lanternflies were covering many of the tree-of-heavens so removal was crucial. Removing these species from the forested area is vital to protecting the native biodiversity and habitat.

Most of the invasive species had spread along the split rail fence and the stone piers. These stone piers are important historical structures that help Susquehanna NHA and others tell many cultural significant stories. From the Civil War burning of the bridge to the Underground Railroad heritage, uncovering and preserving the piers allows for more heritage exploration. 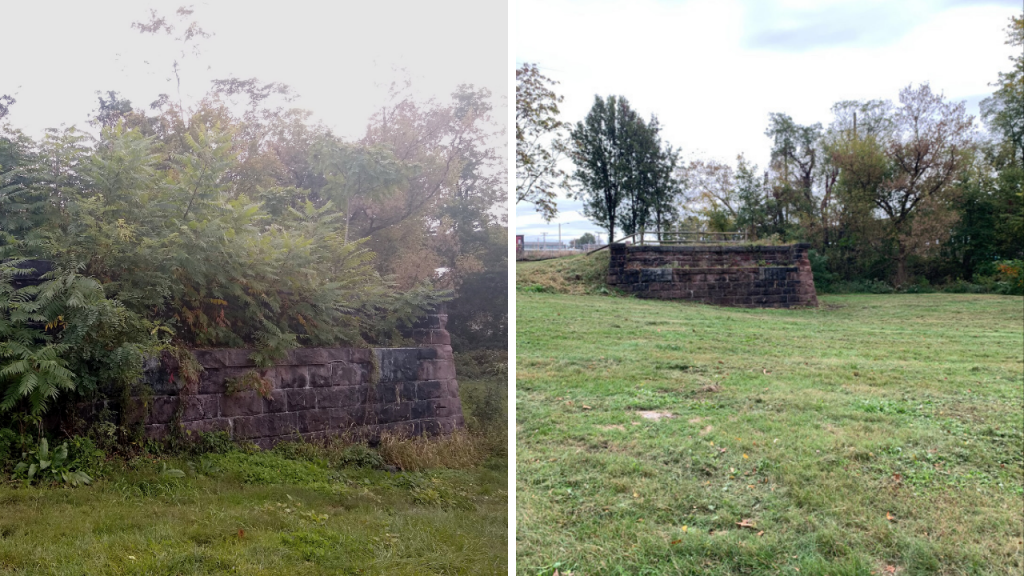 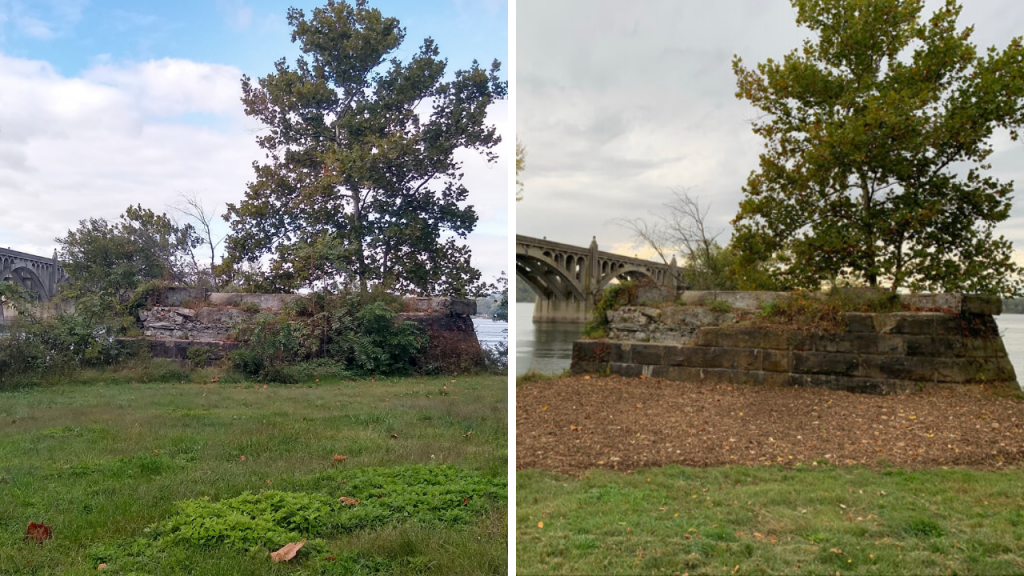 The River Walk was added to the master plan design to provide a walkway parallel the water from the top of the riverbank. Spectacular sunsets and unique bridge perspectives can be seen along the walkway. In early spring 2020, the Columbia Borough Public Works Department cut that path through the woods. Columbia Crossing Director, Hope Byers, utilized a GIS mapping software to overlay the master plan design over the existing park. Stakes were placed exactly where the ‘River Walk’ is shown on the master plan.

The 12′ wide trail had an uneven dirt surface that would have quickly become overgrown without a surface. The Outdoor Corps pushed back overgrowth, removed invasive plants, downed trees, and litter throughout the wooded space to prepare the area. The trail surface was a woody mulch provided by the Columbia Borough Public Works Department and was created by grinding the woody waste from residents. There was enough woody mulch to continue the trail passed the stone pier and down to the waterfront by the existing outfall. Four dump truck loads of mulch were spread along the trail to create a welcoming, even experience. 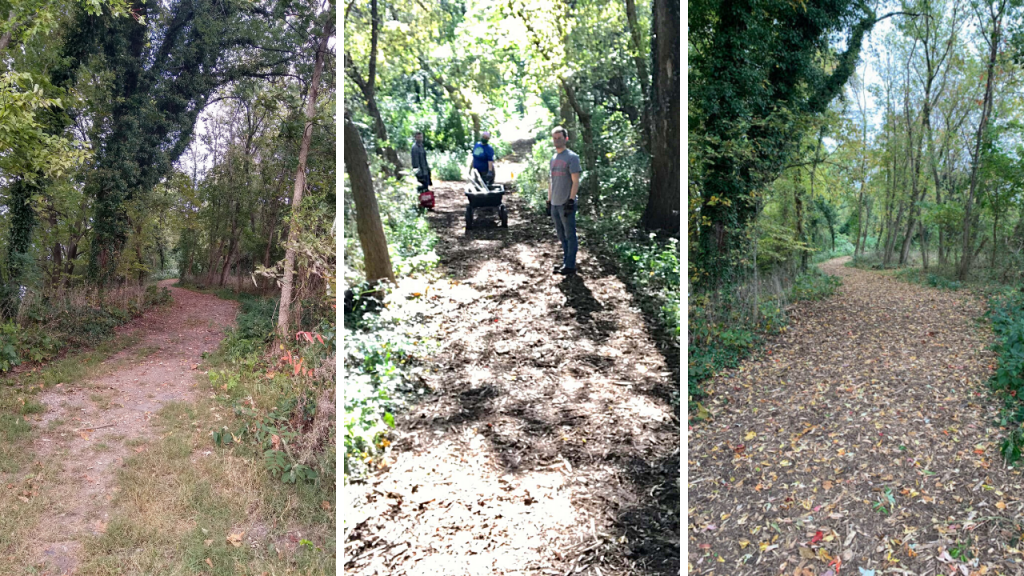 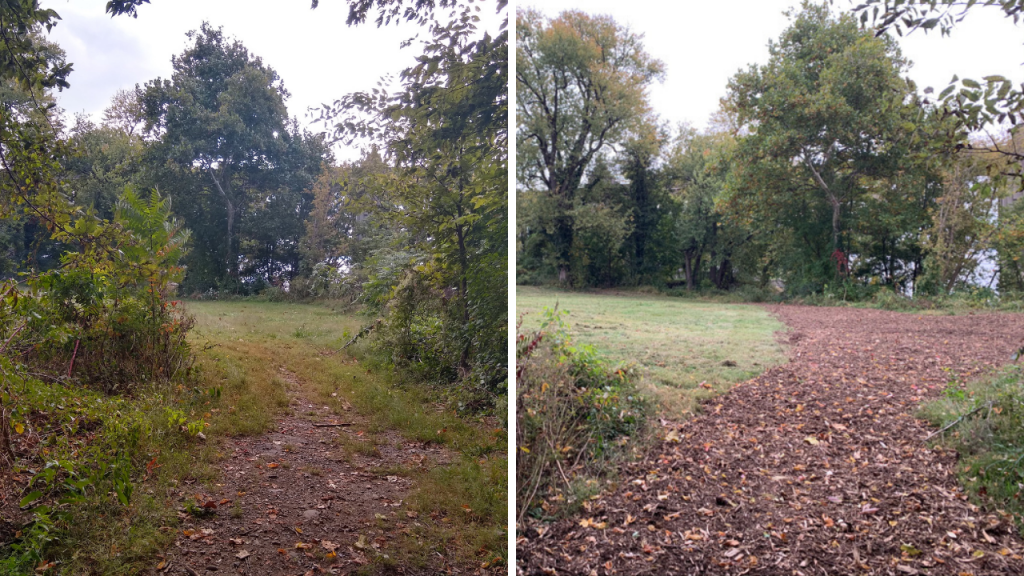 The crew had a few hours between cleaning up the trail and the first delivery of the mulch and offered to do any small projects around the Columbia River Park. They painted and stained posts of kiosks and signs in the park. They spray painted bicycle stencil on the NW River Trail to help guide riders safely along Route 441. They cleaned out the flower beds and prepared them for winter. They also scrubbed all the mold off the interpretative panels in the park. 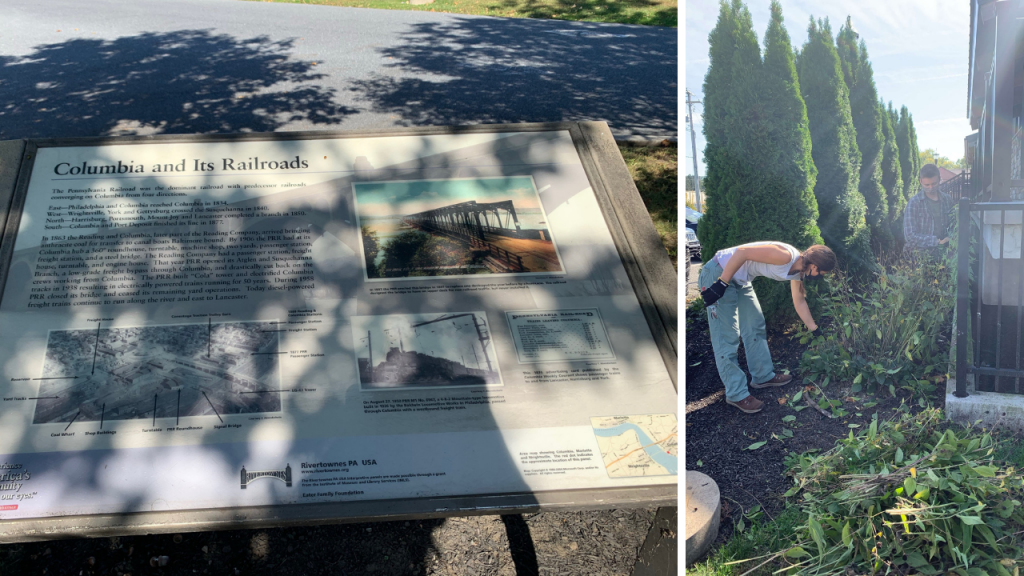 Amazing work by a great crew of dedicated, up-and-coming recreation professionals. We are thankful for their hard work and donor’s hard earned dollars. Together they have made Columbia River Park a greener and more interesting place to visit. We invite all of you to visit Columbia River Park and take a stroll through the expansion area. It is accessible by walking behind Chiques Rock Outfitters outpost under the Veterans Memorial Bridge.