This week SNHA is featuring the forgotten town of Billmeyer, Pennsylvania. The story of Billmeyer is a unique and colorful one, that of a company town tucked along the Susquehanna River in Conoy Township. Once a booming town built around a quarry, Billmeyer has been swallowed up by the surrounding lands and long forgotten by history.

The origin of this story goes back to the 1840’s, when John Haldeman built two lime kilns in Conoy Township, Pennsylvania. John Haldeman’s kilns produced 30,000 bushels of lime per year, the lime being quarried from the hills behind the kilns.

The harvested limestone was burned in his kilns and sold to local farmers as fertilizer, whitewash and plaster. Lime products were in great demand in the expanding steel industry and this business was a profitable venture at the time. The pure calcium limestone was highly sought after and utilized for a variety of purposes. Haldeman still owned the quarry and kilns in 1860. From 1870 through 1894, he leased the operation. It changed hands a few times until the Wrightsville Lime Company took over in 1896. 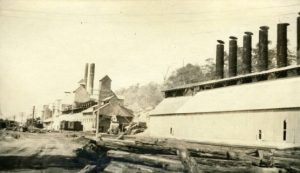 Meanwhile, on the other side of the river, John E. Baker, an up-and-coming Limeburner from York, Pennsylvania, married Mary Billmeyer in 1887.  Around 1889, John decided to partner with his new brother-in-law, George S. Billmeyer to buy a quarry and lime kilns in Wrightsville, calling their new business venture the Wrightsville Lime Company.

In 1892, the Wrightsville Lime Co. expanded, buying property at Campbell’s station in York County. In 1896, it substantially expanded by purchasing all the original Haldeman properties in Conoy Township, with all the kilns and quarries included. Due to their expansion the company name was changed to J.E. Baker Company. When J.E. Baker Co. took over the quarry in Conoy Township, they added a limestone crushing venture to the already existing operation.

Billmeyer supplied stone in the construction of the Shocks Mill Railroad Bridge. In 1905 it opened as part of a low-grade freight line constructed to connect Philadelphia and Harrisburg, today this exists as the Enola Low Grade Line. A company town began to emerge around the growing plant operations. The quarry and town were named after Baker’s wife, Billmeyer. 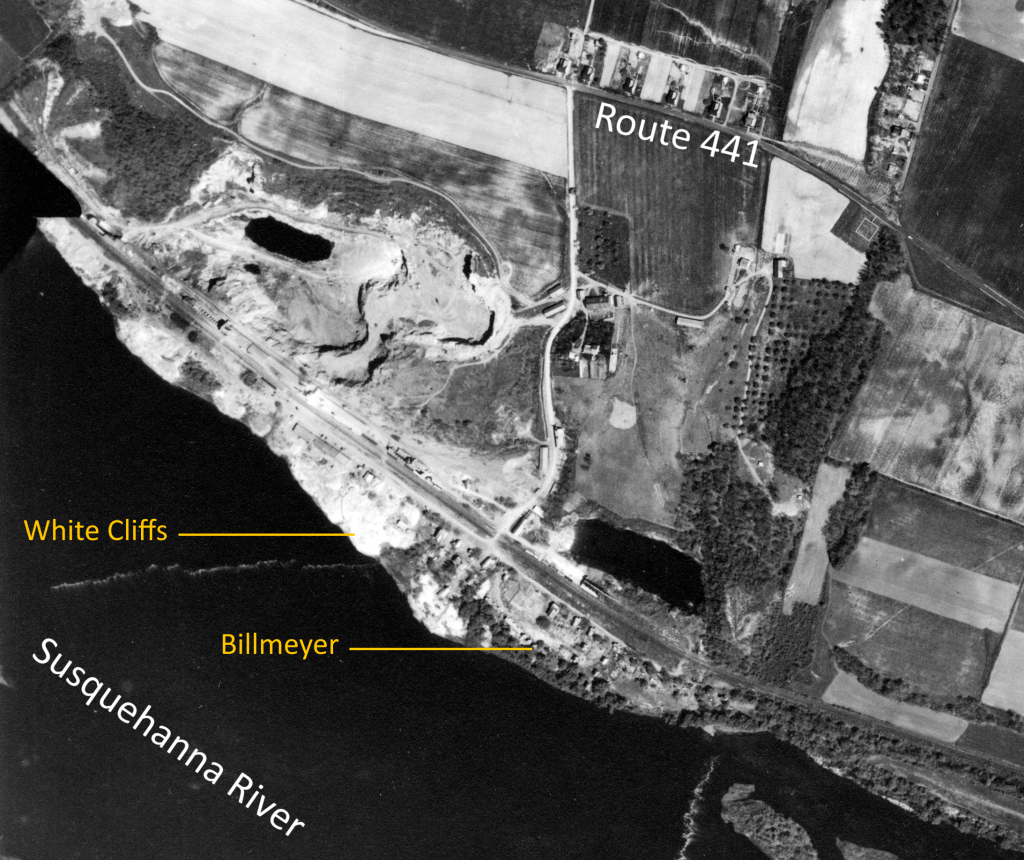 Aerial Photograph from May 1940

World War I (1914-1918) saw an increased demand for refractory products. Raw materials were vital to the war effort. Iron and steel companies were responsible for the manufacture of many items that soldiers used during the war: shoes, helmets, weapons, ammunition, tanks, ships, and more. The use of iron and steel helped define World War I.

During World War I, when America’s trade for magnesite was cut off, J.E. Baker Co. was the first to supply the substitute from the rich dolomite at Billmeyer. The dolomite was used as a basic refractory material used in building up and repairing the bottom of working open hearth steel furnaces. The final product was referred to as “Donegal Dolomite’’ and it was essential to the nations war machine. The Dolomite extracted at Billmeyer was the purest carbonate rock in the region.

It was during this period that Billmeyer became a booming company town. The growing quarry had become a huge industrial operation, but the work at Billmeyer was dirty and dangerous with low pay. During its peak over seven hundred men were employed at Billmeyer by the J.E. Baker Co. Many laborers and their families lived in the company town where they worked, lived, and worshiped together. It was an integrated town with a diverse community including African American workers from the South, European immigrant workers from a range of countries, and regional laborers.

Billmeyer workers earned a reputation as a pugnacious group of men who worked hard and liked to play hard. Drinking, gambling, and fights were commonplace. Paydays meant the local pubs in the neighboring town of Bainbridge would be busy. Stories quickly got around about the “rough town out of sight by the river.”

It was a modest community complete with all the necessities required to be a town. The village of Billmeyer contained company owned houses known as “Society Row”, on the main street of town. It was where the workers lived. Their homes were mostly wood frame and very simply constructed. A company store was built and operated by William W. Mundorff of Bainbridge. A small chapel, post office, boarding house, and school were also built by the company. At its peak, Billmeyer was serviced by the local railroad, with its own stop.

After the war, Billmeyer was particularly impacted by the influenza epidemic of 1918.  No one was permitted to leave town and trains refused to stop. Instead, mail and supplies were thrown out of a train while passing through the town. After the disease subsided and the country recovered after the end of the war, Billmeyer bounced back and operations continued to expand. By 1927, there were 10 pot kilns and 62 flame kilns in operation. Stone from Billmeyer was used in the construction of the Columbia-Wrightsville Bridge, completed in 1930.

The End of an Era

In the 1940’s the demand for dolomite production began to decline. Billmeyer gradually became a ghost town, and by 1954 only 40 men were still employed as a skeleton crew. The town was almost deserted, consisting of few families, many unemployed. All mining operations were concluded in 1957 and the last workers were forced to seek employment elsewhere. In 1961 the quarry pumps ceased operation and the quarry filled with seventy feet of water. Billmeyer had become part of history.

Today some equipment, a few buildings, and the striking blue-green water that fill the quarry are all that remain of this once thriving business and town. All the village buildings of Billmeyer are long gone, sitting abandoned and deteriorating until they were demolished in 2007. Some foundations and other signs of the forgotten town remain hidden among the undergrowth. The town’s main street, the only paved section of the town, is used as part of the Northwest Lancaster County River Trail.

Just north of this forgotten town are the White Cliffs of Conoy, a unique local oddity left behind by the Billmeyer operation. The formation is the waste from the limestone-dolomite, dumped over many years along the edge of the river. The huge white pile of lime and waste rock from the quarry tower 30 feet above the Susquehanna River. The striking color of the cliffs makes them seem otherworldly among the landscape and provide sweeping views of the river. 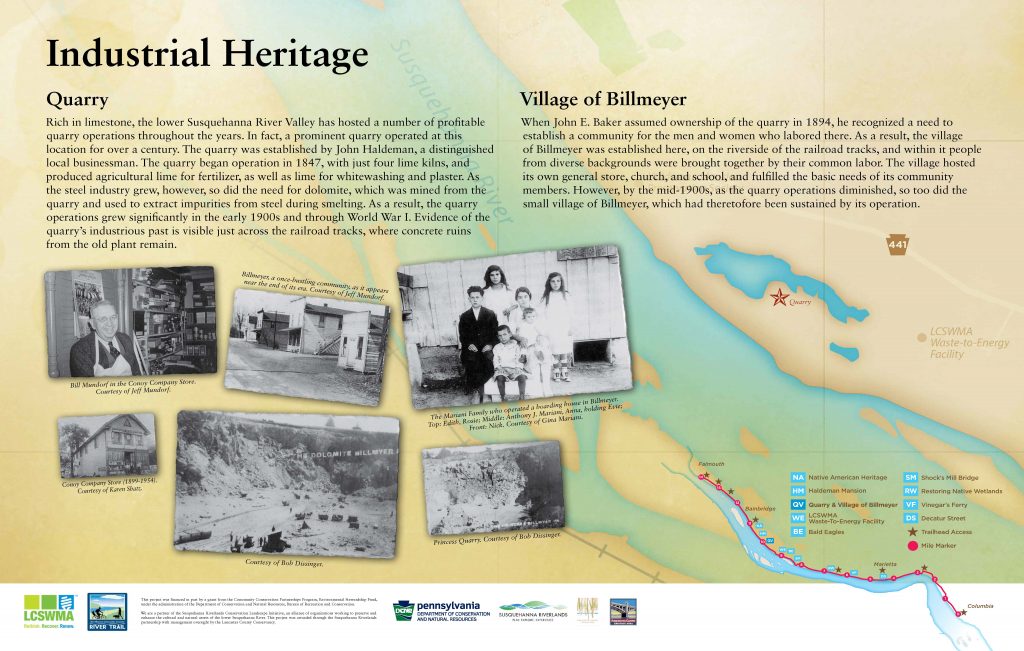 The home of John Haldeman, known as the Haldeman Mansion, still stands today and is visible from the NWLCRT. (John Haldeman is the father of famous naturalist Samuel Haldeman.)

Learn more about the Geology:

Geology & Mineral Resource Report from 1933 from the Department of the Interior. This is a deep analysis of the geology between Middletown and Columbia on the Lower Susquehanna.